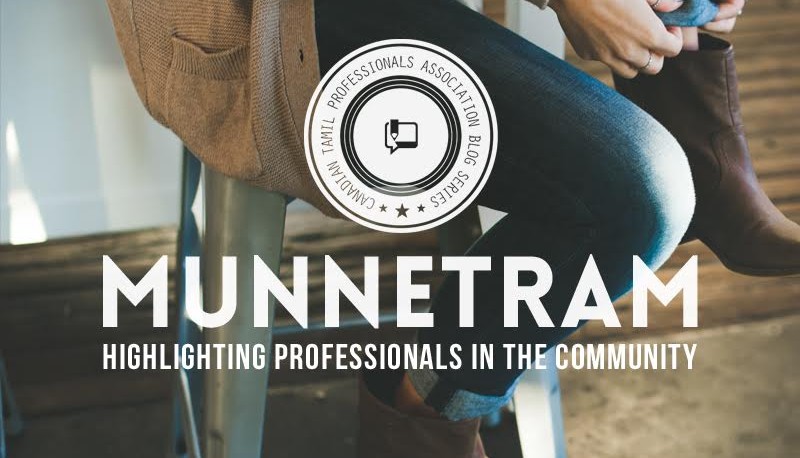 Subi Shehaan is an International Staging and Re-design Professional (ISRP), who founded Design Contours, a company that specializes in interior decorating, home staging and renovation. Her most recent recognition was being deemed the Best Woman Entrepreneur of 2015 by the Canadian Tamils’ Chamber of Commerce.

Interestingly, Subi did not always inhabit the world of design. She holds an Honours Bachelor of Science degree from the University of Toronto in Cell and Molecular Biology. With the strong influence of her family, she originally wanted to become a cardiologist. Despite her evident aptitude in drawing and designing, she began to pave a path in the sciences hoping to achieve her medical school dream. During her senior year of high school, she decided to begin volunteering at hospitals. It wasn’t long before she realized her overwhelming attachment to patients. There were times where the empathy for them was so great, she was moved to tears on several occasions upon hearing their stories and in some instances, upon experiencing the death of some patients. Although this was one of many signs where she felt she should have walked away from the sciences, she continued to push through believing that medicine was where the real job was at.

Although Subi was excelling in the field of science, she found her stress reliever to be in her studio art classes. Her strong passion for the arts was seen and felt through the canvasses she painted. Nonetheless, she pushed through and finished her science degree. She then landed her first job as a secretary at a Hepatology clinic. Subi met a variety of patient types in her new position. Subi’s life changing pivotal moment occurred when she encountered an AIDS patient who was unwilling to admit himself into the clinic. The day after she had convinced him to check in, she found out that he had passed away. It was at this moment that Subi realized that the notion of medical school was a thing of the past and that she didn’t have the heart to deal with such trauma in the field of medicine. She felt like a huge weight was lifted off her shoulders with this newfound realization. Soon after, she held a research analyst position at a Neuroscience Lab at the Centre for Addiction and Mental Health, where she worked for 8 years, performing cryopreservation, PCRs, and DNA extractions to find the alleles responsible for psychiatric disorders. She moved onto a senior position for recruiting summer students and published numerous papers on a variety of mental disorders. During this time, she also took part time design courses at Seneca College even though she had her plate full with her full time career.

After becoming pregnant with Liara (Lia for short), Subi was laid off just a couple of weeks before her maternity leave. While most people would get upset at such an outcome, Subi eventually turned the negative into a positive. Once Lia was born, Subi wanted the flexibility of being with her daughter while also giving into the passion that she always had put on the back burner. She found it was the perfect time to launch her own business as an Interior Decorator and Home Stager. She began to take her 8 month old to job sites. Her contractors and clients would entertain little Lia while Subi went about their houses overseeing what had to be done. This marked the end of Subi’s constant search for something that would make her happy, while not compromising what was most important to her now, Lia. With that, she registered her company, Design Contours in 2008 and she hasn’t looked back or regretted her decision ever since. It is extremely difficult to launch into the world of entrepreneurship without the support of family. Subi’s husband has been by her side supporting her decisions along the way and her parents and younger sisters have been all eyes and ears to assist in any way they can.

“There are always obstacles in life and in anything you set out to do that you haven’t done before. I left my family’s dreams of becoming a doctor behind. I didn’t pursue my supposed career that would rake in the dollars, and I let my hard-earned degree collect dust on the shelf. Changing careers is a big step. It takes a lot of thought to make it happen, especially when we are set and comfortable with where we are. But if you are constantly thinking about making that life-changing move, it is better to jump in with both feet and see where the waves take you. It is better late than never…You don’t necessarily need to have the best of everything, you just need to make the best of everything you have.” – Subi Shehaan

Subi truly loves what she does. Her strong passion for her work speaks through the rooms she sprinkles with her personal touches and the sheer joy she gets from the satisfaction displayed by her clients. As one of her clients once said,”you not only transform rooms, you transform lives.”

On a typical day in Subi’s life, she begins her day by sending her daughter off to school. She then practices the 20-20-20 rule by Robin Sharma, which she raves about. “It has worked wonders for the short time I have practiced this rule,” she says. For 20 minutes, you indulge in cardio workout that helps you start your day on a high note. For the next 20 minutes, you sit down and plan out your day and what you would like to achieve by the end of it. In the last 20 minutes, you learn something new intellectually or spiritually. After this, armed with color charts, fabric swatches, she heads out into the world. Her day includes shopping for accessories, consulting for paint selections, paying a site a quick visit to oversee any work, ordering furniture for any upcoming deadlines, and hauling items to her clients’ homes. She then takes her daughter to one of her many extracurricular activities. “Liara is a go-go do-everything-you enjoy-all-at once never-get-tired type of hyper personality. The apple doesn’t fall far from the tree,” she laughs. After a long tiring day, Subi goes home and enjoys a nice glass of wine while cooking dinner, and enjoys spending family time with her daughter and husband on most evenings and weekends. At times it is challenging to balance both personal and entrepreneur roles at the beginning of a career launch, but once a routine is established, she now realizes the importance of also devoting time to the special people in her life: her family and friends.

“If you love working with people and are physically fit to carry on the demands of this work, let your passion infuse into this rewarding career and you won’t even consider it work. When you are constantly forced to think outside the box, you reach a new potential and your mind is repeatedly active looking for ways to improve your past designs. Your greatest competitor is yourself and the only work you should try to beat is your own, so when you work towards bettering your own vision, you work towards achieving new limits. Keeps you young, active, and motivated.” – Subi Shehaan

A unique aspect of her career is the ability to live her dreams through others. Every client Subi comes across has their own vision for their homes, and in bringing that vision to life with a dose of her own vision, it is a win-win situation for both of them. Moreover, she says, “there is nothing better than to gain the friendship of my clients and be invited to their parties to sit and enjoy the fruit of your labour. Literally.”

Two of her biggest motivations as a designer are: her client’s vision becoming a reality and being able to follow her heart and execute her visions. But her ultimate motivation of all is her daughter calling her the best designer in the world, next to being the best mom in the world.

For more information and further questions, you can visit her website www.designcontours.com or Subi can be reached at [email protected].

If you have any recommendations or suggestions for individuals to be featured in our Munnetram Series, please e-mail us at [email protected]