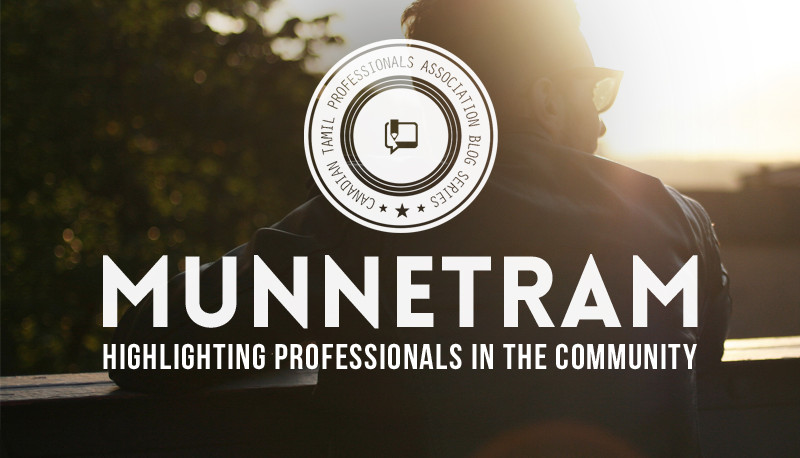 Gajendra Ratnavel (Gajen) is the CEO of L Squared Digital Signage, a digital signage company that services a wide array of clientele such as the Ontario Ministry of Health, McMaster University, Mars, Rogers, and the York Regional Government. For more information, visit http://www.LSquared.com.

In 1987, Gajen migrated to Canada with his mother and sister to join his father. Growing up in the Greater Toronto Area, Gajen adapted to the education system quickly, graduating at the top of his class in high school. As computers began to become an overwhelming part of his life, Gajen’s deep fascination with airplanes shifted towards computers. Thus, he went on to earn an Honours BASc from the University of Waterloo with an option in Management Sciences. He was then recruited right out of university to work at the headquarters of a multinational company, National Instruments in Austin, Texas. Here, he quickly moved from Software Engineering to Project Management. Wanting to move back home and join his family, he transferred to Toronto when National Instruments acquired a Toronto based technology company. He then left National Instruments soon after, wanting to challenge himself. Gajen joined a startup in Mississauga, where he worked for a few years before starting his own company, L Squared Digital Signage.

When Gajen decided to start his own company, he didn’t really have a business plan but he had an idea with a bit of savings. He put together a small team and started developing marketing software. There were several setbacks that they faced; one of their biggest setbacks was a poor business model. Their first product didn’t sell and their advisor even told them that they had no idea what they were doing. Gajen says, “Our advisor was right. I learned early on that we will fall down, and we certainly did. The important thing was that when we fell, we landed soft enough that we were able to at least crawl forward, and eventually walk and try to run again.” The company ended up evolving into a boutique interactive digital signage software developer for the hospitality market. The growth was very slow. In 2012, they noticed a big gap in the digital signage industry that wasn’t being serviced by existing technology, and attempted to target this gap. This led to them building their core product, a cloud based Digital Signage software to target this market which is now known as the L Squared Hub. With their product, they put an emphasis on reliability, effortless operation and affordability. Gajen humbly says he attributes the success of L Squared to all the employees.

“We started in one of the worst economic times in recent history and in many ways that was terrible but because of this we’ve learned ways to keep cost extremely low while innovating in all aspects of the business to push forward. We managed to bootstrap during a tough time and continue to grow organically.” – Gajendra Ratnavel

Gajen truly loves what he does as it challenges him every day with new problems, giving him the opportunity to be innovative. During a typical day at work, he divides his time into three work streams: Administrative (30%), Technical (40%) and Revenue Generating (30%). Gajen spends the most time in technical matters because he loves it; designing new features, giving guidance on priorities for developers, solving technical problems at a high level, and creating custom solutions for customers that need it. Apart from running his thriving company, Gajen enjoys spending time with family, looking into cosmology and genetics, and last but not least entertaining people with cooking and improvised comedy.

“If you know that you can build a successful business, then you should, even at a personal cost because if you don’t, who will? Just do it, but be smart about it. Find someone that has done it before, learn as much as you can, do as much planning as you can to set yourself up for success but the important thing is, you have to do it. Understand you will fall, most likely multiple times, you will need to change your business idea, and you will have to put up with your extended family at Christmas time. It hasn’t been easy, especially when I knew life could be easier if I just gave up and went back to working for someone else. There was certainly more criticism than encouragement but the impact of encouragement was greater for me as I absorbed them and shrugged off the criticism. I am sure a good dose of stubbornness helped keep me going. As an entrepreneur, you will always go through a rough roller coaster ride. The high and lows, emotionally, take a big toll on you. It takes time or they say experience, to learn to suppress this so they are more manageable. Until you get to this point, I realized, it’s best to surround yourself with people that will encourage you. My parents have been a great source of inspiration and strength for me along with other family members. It’s not the most glamorous of a career until you succeed, but once you do, everyone thinks you got lucky overnight. Well, someone has to do it. ” – Gajendra Ratnavel

Keep your eyes out folks for a new initiative being launched by Gajen, Kumaran, Bahi, and Bren this fall directed at aspiring entrepreneurs. This initiative will involve regular educational sessions as well as support and guidance.

If you have any recommendations or suggestions for individuals to be featured in our Munnetram Series, please e-mail us at [email protected]