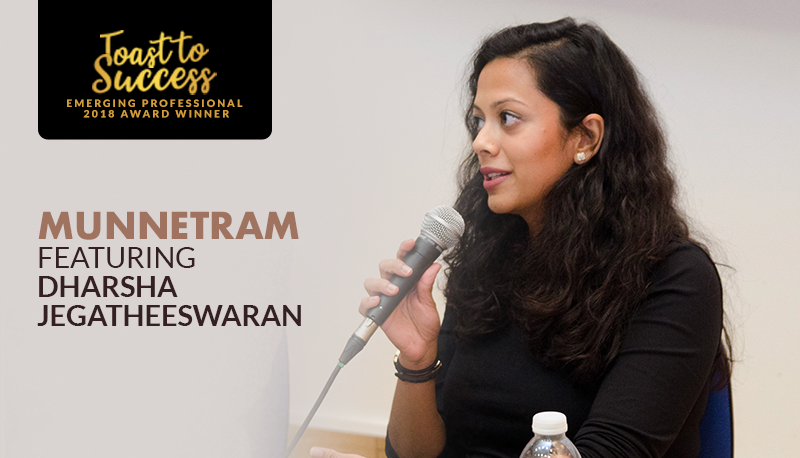 This year, we introduced our new Toast to Success awards, as an effort to recognize leaders who have demonstrated professional growth and strong commitment to the Tamil community. The inaugural recipient of CTPA’s “Emerging Professional” award is Dharsha Jegatheeswaran.

Dharsha has made exceptional contributions to the Sri Lankan Tamil community by using both her legal background and her knowledge of the Sri Lankan political climate. She made a remarkable decision to move to Jaffna for two years and help co-found the non-for-profit think-tank, Adayaalam Centre for Policy Research (ACPR). The ACPR critically looks at policy issues affecting the Tamil polity in the North-East of Sri Lanka and actively includes community voices in advocacy and social justice efforts.

She has also created spaces in Toronto to discuss issues pertaining to the Tamil community, by setting up a reading group for those interested in learning about the Tamil struggle. She has conducted research for multiple Tamil diaspora advocacy organizations and was also formerly the Human Rights Director for Washington-based NGO, People for Equality and Relief in Lanka (PEARL).

Lawyer by Day, Activist by Night

Dharsha grew up in Scarborough, completed her undergraduate degree at McMaster University and her Juris Doctor at the University of Toronto. Coming from a family that was not very involved in Sri Lankan politics, Dharsha only became actively aware of the conflict when she was in university during the time of the 2009 protests. In fact, her first engagement with the civil war was through “comment wars” with racist and ignorant people on Globe and Mail articles.

After finishing her undergraduate degree in 2011, Dharsha had a year off before starting law school. She took this opportunity to go to North-East Sri Lanka with her sister and cousin. Upon arrival, they cold-called countless NGOs to get exposed to their work and see where they could help out; a move with hindsight and further learning she realizes was probably very risky and would not recommend. Her experiences in Jaffna, Kilinochchi and Batticaloa were an eye-opening experience. Seeing the community there made her very aware of her own privilege to have grown up outside of the war. After this experience, she made sure to take every opportunity during her law career to help with Tamil rights issues. She even went back again in 2013 to work for a Colombo-based human rights think-tank and co-published a report on illegal land acquisitions.

Her Career Crossroad and The Birth of Adayaalam

Being very involved with Tamil rights issues, Dharsha connected with many other Tamils interested in activism while she was in law school. Especially starting in 2015 with the regime change, she noticed growing discrepancies between what Colombo was saying and what the activists and communities in the North-East had to say.

In 2015, Dharsha had to make a difficult career choice. She could either stay at the corporate litigation  firm where she articled, work for a few years to pay off her loans and then eventually get involved with NGOs; or go back to her homeland immediately to help her fellow Tamils. While the regime had changed in Sri Lanka and created a small window, Dharsha felt that there would be a very strong possibility of Mahinda Rajapaksha coming back to government in the following 2020 elections. Because of this, she felt like she had to seize that window of opportunity. As soon as she was called to the Bar, Dharsha moved to Jaffna for two years to help set up a not-for-profit human rights think-tank with local activists and academics: the Adayaalam Centre for Policy Research.

When asked if she felt like she had a responsibility to help start this initiative, Dharsha noted that given her training as a lawyer and being very well-connected to the diaspora and local activists in the North-East, she felt she could really make a difference. She also felt it was the right time to create a space in the North-East, seven years after the war had ended and with a small amount of space that had been opened up. She found that even though a regime had changed, Tamils in the North-East were becoming increasingly frustrated because nothing had genuinely changed. The military and the Prevention of Terrorism Act still remained, a lot of land had still not been released, disappearances were still unanswered and generally people did not feel free.

One of her initiatives with Adayaalam that stuck out was the Stories of Resilience project. Although there is a lot of documentation on events during the war and about the survivors of the war, most of the stories makes Tamil people out to be nothing more than victims. Dharsha wanted to show a more complex way of carrying peoples’ stories, not just focusing on how they have been victimized. She wanted to highlight elements that were eroded by militarization and the Sri Lankan government like strength, bravery and the power of community. She has done a great job sharing stories of war victim-survivors to reflect all of these elements and create unity amongst us.

Finding Motivation in the People

Although most would view being so involved in activism in your mid-twenties as early, Dharsha wishes she started earlier. She cites the people of the North-East that continue to advocate for their rights and resist against oppression as her biggest motivation to give back. During her time in Sri Lanka, she came in close contact with a very strong group of Tamil families of the disappeared who protested for over 500 days to find truth and justice about their missing loved ones. Primarily women, they survived the war and IDP camps, but were still so brave and courageous. They would never give up on their struggle to find their loved ones.

Dharsha recounts another group of incredible Tamil women she witnessed in Sri Lanka: a group of Tamil women who tried to get back their island, Irainateevu, that was seized by the military in 2008. After years of trying various methods to get the land back, these women decided to begin a continuous protest in April 2017. Life on this island was different; the women used to make more money than the men and had more opportunity there. With this island being taken over, the women were the ones who lost the most livelihood and now had to depend on their husbands, brothers, and fathers to survive. These women had the mindset that if they did not get their land back, they would get in boats and get it back themselves. And so after almost one year of protest, they decided to go on boats with white flags to get their island back. Within a week, they achieved just that! Dharsha had the incredible opportunity to see this first-hand. She explains that it is rare to see the Sri Lankan government respond to Tamil protests and advocacies, but this group of women were able to achieve what so many people have been unable —a true inspiration to many.

It Takes a Strong Support System

Dharsha credits her supportive family, especially her very strong mother, as her pillar throughout her journey. Something she realized she took for granted growing up, is that within her own extended family, it is the women who lead. She never felt inhibited like many other Tamil women do, and was always encouraged to be strong-willed and independent. Although her parents weren’t very politically involved, they made sure to inform her of the refugee struggle. She knew about their difficulties to get to Canada and settle down, so she feels it was almost inevitable that she would eventually work with human rights.

Finding Her Seat at the Table Through Education

Although there are many different uses for a law degree, Dharsha knew she wanted to make a positive difference. While many of her peers are still working on Bay street, she is happy with her choice to take a different path, since the reason she went into law in the first place was to work on human rights issues. Dharsha is very thankful for the platform that law has given her, especially when working with Sri Lankan politics. Being a young Tamil woman in an older male-dominated community, her law background gave her more authority and countered people who could have otherwise been dismissive towards her. She feels this is an unfortunate state of affairs, that for a Tamil woman to be taken seriously she has to be very well-accomplished, and is working towards efforts to change these dynamics. Being very focused on Tamil issues and how the war and human rights affect Tamil people, influenced Dharsha to work in Sri Lanka. She is very aware that she was only able to do this because of her own privilege. She had no family to take care of and her parents were comfortable enough to support themselves, so she was free to make this decision for herself.

At the moment, Dharsha is unsure of what the future holds during this “transition” stage in her life. She is currently studying at the London School of Economics doing her Masters in Law. She is focusing on learning more about public international law, as this is an area that will help her with activism. To young lawyers, Dharsha’s advice is to be clear on why you’re going to law school or choosing a career in law, and not to see law as the only way to get involved in human rights work.

“You don’t always have to follow the beaten path. There are
lots of different ways to be a lawyer or a human rights activist.”

Let’s Empower One Another

As an individual who was nominated for this award, Dharsha definitely has many proud people looking out for her. She credits being fortunate enough to meet many incredible Tamil women in Toronto and truly believes that Tamil women have made such incredible progress in all fields. She tries her best to mentor others. Since she has benefited from experienced Tamil mentors herself, she wants to repay the favour to younger Tamil women.

“It’s important to open doors for other women and
leave them open for others to come in behind us.”

Congratulations to Dharsha for winning the Toast to Success Emerging Professional award!