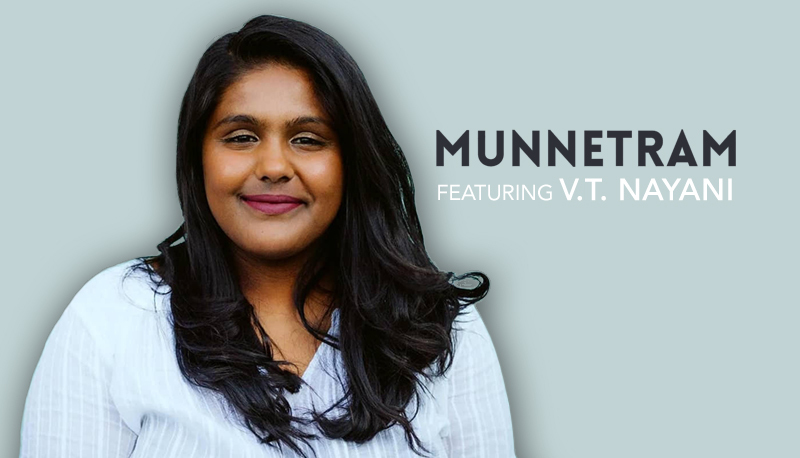 V. T. Nayani is an award-winning director, producer and writer, working in film, television, and digital video. Her first feature documentary, Shadeism: Digging Deeper, was screened at film festivals across the world. We sat down to talk to Nayani about storytelling, diversity in cinema, and what it is like to be a filmmaker.

Growing up, a love for stories was born

As a child, Nayani was immersed in a literary wonderland. She grew up in Flemingdon Park, in an apartment building with her family. Her uncle, who lived in the same building, worked at a book factory for a major publisher and would often bring back free books, giving Nayani a treasure trove of stories. Her father also helped instill a love for reading, by taking Nayani and her brother to the library constantly. For Nayani, she couldn’t remember a time when she didn’t have a library card, and through devouring book after book, a passion for writing grew within her.

“Books were my refuge, for more reasons than I can count.”

This passion only burned brighter when Nayani was in high school, plunging headfirst into AP English. She also took drama classes, and continued to indulge her interests in cinema and the arts. She studied journalism at Ryerson University, hoping to work for a magazine or in TV newscasting; however, during her undergrad she noticed the news shifting from long-form journalism to a 24-hour CNN style, which didn’t suit her at all. In her final year, she decided to take a TV documentary course and explore that form of filmmaking. That class was the catalyst for her career, for the short doc she made as a class project, Shadeism, gained significant traction when it was posted online in the Fall of 2010. From there, Nayani dived headfirst into documentaries, as they gave her the time necessary to tell deep, nuanced stories.

Storytelling and diversity in cinema

For Nayani, not only has storytelling been part and parcel of her life, but it is also an integral part of Tamil culture.

“If you think about it, our inherent love for movies, music, magazines, and other artforms, stems from a deeply rooted celebration of storytelling in Tamil culture.”

However, we don’t always see our stories in film and TV, instead finding the lives of the majority reflected on screen. TV and film media was born in a different time, and since then the times have changed, but the people…have not. We still see the narratives of the majority white, heteronormative population on the screen, but rarely will we find a show, or a film, that speaks to our heart and our lived experiences.

Nayani challenges that by producing films with collaborators who serve to uplift marginalized communities and showcase their stories on screen. When her works look at the past and present, it is with an intentional and introspective focus. It’s important to acknowledge history as it happened, so that we can learn from it and grow as a society. But when she looks at the future, it is with a sense of hope, dreaming of what could happen and what may happen. There are so many possibilities out there for Black, Indigenous, and other people of colour (BIPOC) , and film is one of the ways that Nayani explores these possibilities.

When a filmmaker collaborates with an othered group, or is from an othered community themselves, that is when we see narratives that are true to the heart, that are borne out of the lived experiences of their family and friends. Those are the kinds of stories that V. T. Nayani wants to produce and contribute to, with the help of her collaborators and the communities she works with.

The mainstream cinematic world may be making strides in their goals to improve diversity and inclusivity, but we don’t always have to wait for them. We can create the diversity and inclusivity we wish to see, and in this day and age, streaming services are one of the ways we can achieve this. Platforms like YouTube and Netflix have allowed many independent storytellers to showcase their own works. Indeed, when Nayani uploaded her short doc Shadeism to Vimeo, she saw an outpouring of support from young racialized women, who had also experienced shadeism in their lives.

“As Ava DuVernay said, we should focus on building our own houses.”

Translated to filmmaking, that means that it’s not enough to see BIPOC actors on screen, when the director, writer, producers, and other crew members are all white. It means that to see our stories portrayed authentically on screen, we need to be involved in all levels of filmmaking, from the production crew, to the writer’s room, to the director’s chair.

A day in the life of a filmmaker

Contrary to popular belief, being a filmmaker isn’t just about yelling “CUT!” after each scene. There is a lot of buildup and behind the scenes work that goes behind each project, and for Nayani, no day is ever the same. Some days, she will be furiously writing email after email, writing up grant proposals, and working on scripts. Other days, she’ll be out in the field directing a project, while coordinating the various crew members and cast on set.

Surprisingly (or maybe unsurprisingly), a director has to be organized and ensure that the logistics of each day are smooth, managing the work of the cast and the crew. At the same time, Nayani has to be prepared for anything and everything, since a day on set is never predictable. Problems can arise, the day may run late, and even the weather may not cooperate for the day. In a way, it’s as if Nayani is working within organized chaos. When she’s not emailing, directing, or working with collaborators, you can probably find Nayani… sleeping. When your schedule is definitely not 9-5, and you have to deal with a whirlwind of tasks: resting and playing,  whenever possible, is an acquired skill.

Throughout her life, V. T. Nayani has had many mentors and supporters. The foundation of that support are her parents, who have encouraged her from a young age to pursue her dreams. Her brother and cousins are also encouraging, as are her circle of friends.

“My parents were supportive of me pursuing my dreams, as long as I obtained a university degree. They didn’t always understand my world of work, but in the end they wanted me to be safe and successful, as I imagined that for myself. And for that I am truly grateful.”

V. T. Nayani also credits her growth to the elders and mentors that guided her on her journey. She found that at every stage of her career, she met people who believed in her work and who saw the fire burning in her eyes, and knew that she had a true love for her work. There are no names, because it would be impossible for Nayani to name everyone that has supported and influenced her work. Now that she is older, Nayani finds that she sees the same passion burning in the eyes of her younger peers, and she encourages them to pursue their dreams.

“When you do something you really love, other people will see it and will be drawn to you, because they see that your passion and intention are authentic.”