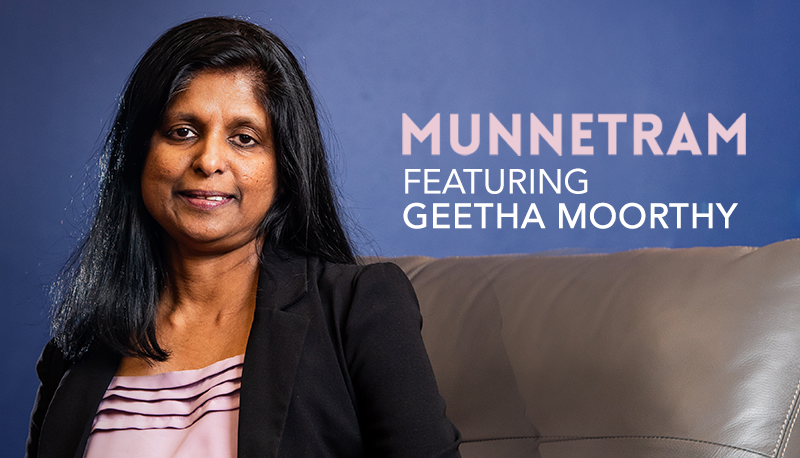 This year, we presented our second annual Toast to Success awards to leaders who have demonstrated professional growth and strong commitment to enriching the Tamil community. This year’s recipient of CTPA’s “Established Professional” award is Geetha Moorthy.

Geetha Moorthy is the founder of the South Asian Autism Awareness Centre (SAAAC). She created SAAAC in direct response to the growing need for awareness for South Asian families impacted by Spectrum Disorder (ASD) and related development disorders. The centre has since expanded its scope and services to support other newcomer communities. SAAAC helps families that lack access to vital ASD services and information due to language barriers, low incomes and lack of networks. SAAAC currently offers a diverse range of services that support 350 families annually.

As a young girl, Geetha always wanted to become a medical doctor. It wasn’t easy to get into medical school and it was even more challenging in Sri Lanka. So, Geetha decided to pursue an alternate route through studying business. She continued her ICMA (Institute of Cost and Management Accountants) and pursued accounting as her career. Growing up, dance was Geetha’s true passion, learning two styles of dance: Bharatanatyam and Kuchipudi.

After Geetha moved to Canada, she continued her passion by teaching dance. She wanted to give back to the community through dance. She began to organize many dance shows for charities such as Sick Kids Foundation and The Children’s Wish Foundation.

In 2007, Geetha met with the MukiBaum Accessibility Centre. She did a charity show for this organization and saw many children with autism, which really touched her. This was something she had not come across in the South Asian community, so she was curious and started researching about Autism Spectrum Disorder.

She wanted to help, but did not know where to start. She decided to use her passion for dance and committed to teaching dance to children with autism.

She met with a doctor from Sri Lanka, who approached Geetha thinking she was an Autism Specialist. Regardless of her professional background, the doctor recognized Geetha’s passion to help children with autism and encouraged her to go for it.

Geetha started SAAAC at her own place, in her basement. She had a small team of professionals to assist her. Through word of mouth, the clientele started to grow to 25-40 people. She quickly realized in order to do more, she needed assistance from professionals in the industry, which would require paying them. At this point, she decided to throw a fundraising gala to raise money. SAAAC’s clients, her staff and the volunteers quickly grew in numbers and they eventually moved to their own centre.

Geetha made it clear that there were many obstacles that she faced in starting SAAAC. Since her professional background was not in Autism and Behavioural studies, she got the occasional pushback with people questioning her qualifications.

Geetha simply wanted to help people. She knew she did not have the specific qualifications to run the organization, but she was confident that she could find the right people to make it happen.

“To help people, you don’t need to have experience or qualifications in the field. You just need to help, that’s it.”

In the beginning stages of SAAAC, they did not have enough funds and had to rely heavily on their creativity to make things happen.

Geetha started the organization SAAAC in November 2008 and decided to quit her job in 2011. She says “If you want to succeed, you need to give up or sacrifice something.”

Geetha has been instrumental to the growth of SAAAC, along with her amazing team and volunteers. SAAAC currently has 25 staff members overseeing 15 programming streams, supporting 350 families. Additionally, services are enhanced with the involvement of over 150 trained volunteers. The Centre offers subsidized and free services, most notably their SAAAC Cares program, which helps increase caregiver capacity to support the development of children with autism. The Cares program was one of the earliest SAAAC programs, having been in operation in some form since 2009, and has evolved with the input of health and education specialists. To accommodate for the growth of the organization, they have recently moved to a bigger space. The entire team of staff and volunteers work very hard towards providing the best service to their clients.

Geetha handles the finances in the organization, as that is her professional background. She also helps with fundraising, donations, networking and creating partnerships.

Best part of your job?

Geetha states that every single minute, something happens at her job. She is someone that seeks challenges and admits that she gets bored easily, which is a reason why she never grew to love accounting. When she took the leap to quit her job as an accountant and begin her journey with SAAAC, it was the highest satisfaction she has achieved.

Her advice to young people is that if you have the passion, someone will connect you somewhere. If you have a talent, you can use it in a way to make others happy and you will find your path to where you are destined to be.

“Work hard and be patient and wait to get the results, it won’t happen overnight.”

She states, wherever you are working, your references are very important and previous employers can come in beneficial in the future. It is important to attain a good reference. Whether you like the job or not, you should put in 100%, as it can take you to the next level.

She encourages young people to make connections and talk to people. She suggests to talk to professionals about what they are doing and how they got to that level. Geetha states that networking is key and to connect with people who are doing well, in order to gain advice and guidance. She advises young people to not rely on social media to network and to actually network in real life.

If you feel like you want more out of your job, she suggests having a conversation with your boss. She says to talk about your future goals, ask for feedback on your performance and ways that you can improve.

Who are your mentors?

Growing up, Geetha’s mentors were her parents. She said a lot of people were not fans of her pursuing dance, but her parents continuously encouraged her to dance. Her parents recognized her talent and helped her achieve her goals. She said her parents were hospitable and always willing to help people. Anyone who stepped into their home was always offered food.

She constantly tries to surround herself with positivity. She believes that if you do the right thing, things will fall into place.

Geetha is constantly learning through her job. She learns from her volunteers, the staff, the parents and the children. She is someone that will always take every piece of advice or constructive criticism and finds ways to improve.

One thing to can improve on?

Public speaking. Geetha states she is someone that prefers to be behind the scenes. She needs to prepare heavily before she goes on stage; if she doesn’t, she doesn’t feel as confident. She wants to work on getting better in this area.

She is working on many creative projects with SAAAC which are exciting and new. She says that many projects are underway so she constantly needs to be on top of it all.

Describe yourself in three words

Tamil movies and serials. She particularly likes watching children sing on one of her favourite shows, Super Singer. She also loves to watch Broadway musicals.

Congratulations to Geetha on her Toast to Success Established Professional award and thanks for sharing her story with us!