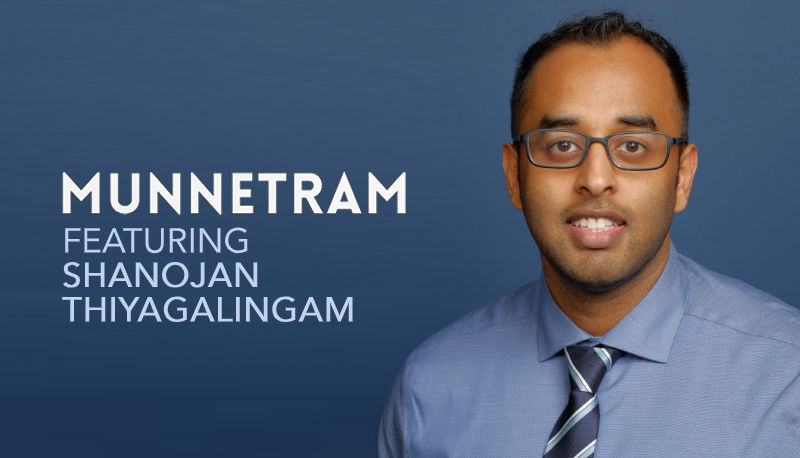 For our second annual Toast to Success awards, we celebrated leaders who have demonstrated professional growth and strong commitment to enriching the Tamil community. Last year’s recipient of CTPA’s “Emerging Professional” is Shanojan Thiyagalingam.

Shanojan Thiyagalingam was born and raised in Toronto. He began his academic life in medicine at the University of Waterloo where he was involved in neural stem research at Toronto’s top medical research institutes. During this time, he was involved in social justice activism for Eelam Tamils. He later pursued medical school and earned a Doctor of Medicine degree with high honours.

He helped raise funds to assist Grenada’s cardiology aid society and completed internal medicine residency training in New Jersey. He was involved in medical research and presented in the U.S., Canada and European countries at the internal medicine, geriatrics and critical care societies. He is currently completing his Geriatric Medicine Subspecialty training at the Mayo Clinic, ranked as the number one hospital in the U.S.

Growing up, Shanojan was intrigued by the sciences. He would read about the way the body works and would always be watching science videos. He even attended summer science library camps. As he grew older, his interest gradually progressed to the medical field in university. He thought about doing research, but he knew he wanted to help people out directly, so he decided to choose the path of becoming a medical doctor.

During his undergrad degree, Shanojan had family and friends that were affected by issues in Tamil Eelam. He kept busy by raising awareness of the issues and while this involvement distracted him from school, it taught him a lot in life.

Another challenge that Shanojan faced was being able to afford and pay for medical school. He faced many financial hardships, but he was able to overcome it.

As mentioned above, Shanojan is currently completing his Geriatric Medicine Subspecialty training at the Mayo Clinic. His motivation to pursue the geriatric field came from personal experience — his grandfather had Alzheimer’s. His grandfather’s condition worsened to the point where he was wandering off on his own and he forgot who his own kids were. Shanojan felt helpless. He felt as though there was not enough information available for families and patients dealing with Alzheimer’s and dementia.

What have you learnt dealing with geriatric patients?

“Geriatrics is a very unique field. You need to truly understand what is going on with Geriatric patients.” Shanojan explained that they have their own set of unique problems and challenges. For example, geriatric patients usually have dealt with multiple medical issues over the years. This can stress out families. Shanojan feels that it is very important to educate families and prioritize what is important to them and the patients.

Shanojan starts his day by seeing clinic patients, which usually takes the whole morning. Once that is done, he has research meetings, where he collaborates with different departments. He then continues with his training by working in different departments. He also works with experts in geriatric conditions to learn more about how he can enhance the geriatric speciality.

He works with people in different departments such as neurology, and sees patients with them.  This allows him to receive their clinical experience and techniques for him to use in his own geriatric clinics. Once that is complete, he studies for his geriatrics licensing exams.

Best part of your job?

Shanojan says the best part of his job is going on home visits to see geriatric patients in their homes. This allows him to directly observe how patients are living their lives and taking their medications. He gets a better perspective into how his patients’  lifestyles are and is able to connect with them in a different way. He believes it is a truly better way of practicing medicine.

To Shanojan, medicine is a very collaborative environment. Medicine cannot be done in isolation; therefore, 99% of his job involves working with others. He is continuously working with other departments, nurses, cardiologists and he collaborates with different hospitals and their physicians.

Shanojan’s ultimate goal is to advance the field of geriatrics. He wants to continue to research the field, as it is a newer area that requires a lot of research.

Currently, he is working on swallowing issues in the elderly population. Dementia and strokes are common causes of difficulty with swallowing. It occurs commonly with older adults and there is no real solution that has a meaningful impact.

Shanojan wants to finish his training and research in geriatrics and would ultimately love to share his knowledge with physicians and patients in Tamil Eelam.

How do you spend your time?

Shanojan dedicates a lot of time to studying, which can be stressful. In order to balance his busy lifestyle, he keeps himself busy with a good social network. He also enjoys working out on a daily basis.

Looking back, what is one thing you would have done differently?

Looking back, Shanojan says he wishes he had mentors in medicine at a much younger age in order to get a head start in medicine. He says it gives an advantage as you are progressing in the field — it allows you to achieve more.

Describe yourself in three words?

Dedicated, goal-oriented and a team player.

Advice for young people trying to get into Medical School?

Medicine is a very demanding and busy field; however, Shanojan feels that it is truly rewarding as you are able to impact and change patients’ lives.

The first thing he suggests for young people is to ask themselves is if this is the field that they truly see themselves getting into. Once they feel like they are sure, they need to begin building a portfolio to show their dedication and passion for the field.

He advises young people to get involved in research and volunteering, as they are great methods to demonstrate commitment. He also advises to have a good story of why you want to go to medical school.

Shanojan began volunteering at a nursing home during high school. He also did research during his undergraduate studies at a neurology lab. He didn’t just volunteer and research for a small period of time, he did this persistently for many years.

In order to create opportunities, Shanojan was diligent in reaching out to as many people as he could. He sent out dozens of emails to various labs to ask them to take him on for the summer. By being persistent, he got into the Toronto Western Hospital’s top research lab and ended up being accepted into the summer research program. He also worked at multiple different research labs. He started with research at the University of Waterloo, where he volunteered at a lab that was part of a competition (iGem-national competition).

He used that experience to enhance his CV, which led him to an opportunity at a neurology lab. The experience at the neurology lab led him to obtain a position at the Ontario Institute for Cancer Research. He used all of this experience to build his profile to get into Toronto Western Hospital’s Stem Cell Research Lab.

He states that there are many emails available online of various research labs and he advises to contact them to seek out opportunities to do research. He believes that there are no excuses in today’s world of not being able to do something. You can always do it if you put your mind to it.

Very. Shanojan advises people to have a story when approaching someone at a networking event. It is about marketing yourself. Don’t expect the person you are networking with to hand you a plate of answers. The goal is to talk to them and obtain advice on how you can enhance your career. If you pose the question of why you want to go into the field, they will be more interested in mentoring and helping you. Show them that you are passionate and that it is worth talking to you.

Even if you think that you won’t gain anything by talking to someone, do it. Everyone has knowledge to share, so you will always end up learning something new.

He also advises to have a clear vision and goal. Be persistent.

Shanojan feels that in today’s world, it is never too late to pursue what you want to do. He says the key thing is to simply have a goal and a vision. Have a vision of where you want to be in 5-10 years.

He feels that it is important to plan and map out what is required for your vision and what steps you need to take to go towards it. For example, if you want to get an MBA, you know you need to do an entrance exam, or courses to help you. You need to invest time and find mentors.

Mentors have been a big part of Shanojan’s journey in his career. During medical school, he created a lot of opportunities with mentors. For example, during his residency training, he had his department chairman and program director who were great mentors and encouraged him. Through this experience, he was able to work closely with his program director and Shanojan ended up winning multiple awards from his residency.

To young people who want to become doctors?

Shanojan’s key advice is to get involved in the field at a very young age and to see if you actually like it. He suggests young people to volunteer at a hospital, or a nursing home, or take on a research job for the summer.

If you volunteer at a hospital, it will give you the opportunity to meet a nurse or a doctor who you connect with to see if you actually enjoy science. He states that volunteering is the easiest way to find out if you actually like something.

In addition to volunteering, he advises young people to talk to people in the field and see what opportunities are out there. There are so many options out there: ranging from selling medicine as the pharmaceutical rep, to working in the government representing the health care interests of patients.

Congratulations to Shanojan on his Toast to Success Emerging Professional award and thanks for sharing his story with us!