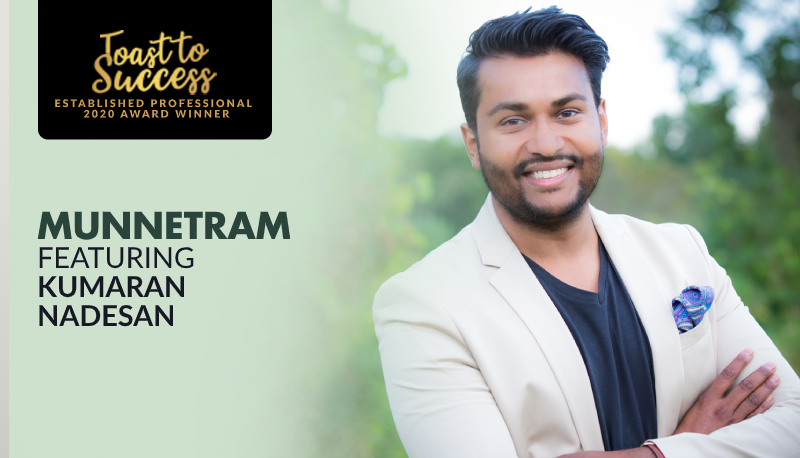 Our annual Toast to Success Awards of Professional Excellence, celebrates leaders who have demonstrated professional growth and strong commitment to enriching the Tamil community. The 2020 recipient of CTPA’s “Established Professional” award is Kumaran Nadesan.

Kumaran is a civil servant currently working as a Senior Business Consultant in the Ontario Public Service. He was born in Jaffna, Sri Lanka but left the country as a refugee when he was five years old to Chennai, India. After living in Chennai for several years, his family packed up and moved to Muscat, Oman where he completed his UK General Certificate of Education (GCE) Ordinary Level, equivalent to grade 10 in Canada. Unfortunately, since Oman did not offer many higher education opportunities for expats, Kumaran and his family found themselves moving yet again – this time to Toronto, Canada where he graduated high school and attended the University of Toronto Scarborough completing his B.A. (Hons.) in English and Psychology. Following a brief marketing stint at a corporate law boutique, Kumaran decided to pursue a law degree, at Monash University in Melbourne, Australia. However, a life-changing opportunity came knocking and he found himself cutting his law studies short and returning to Canada to work for the Ministry of the Attorney General of Ontario. From there, he has worked his way through several provincial ministries in progressively senior roles in intergovernmental affairs, business development, stakeholder relations, communications, and policy and program advisory. Passionate about creating value across multiple sectors, Kumaran also heads up his own bespoke strategy consultancy, Konnect Communications, through which he selectively works with visionary business leaders and corporate executives who are committed to building high value brands.

Kumaran is not just a civil servant or entrepreneur however, as he is also the catalyst behind several professional and entrepreneurial networks that seek to further strengthen the collective clout of the Canadian Tamil diaspora and undertake broader critical cross-cultural engagement with POC communities, including progressive Sri Lankan Canadians. His most prominent role, though, is as Founding Chair of comdu.it, a fast-growing international development organization that focuses on mobilizing knowledge capital, responsible investments, and community networks within the global Tamil diaspora towards the sustainable development of the traditional Tamil homelands and other vulnerable communities in Sri Lanka. Kumaran has also been involved in fundraising and philanthropy since his first humanitarian relief campaign for the Canadian Red Cross in the aftermath of the 2004 Indian Ocean Tsunami. Since last year alone, he has spearheaded fundraising efforts that have raised more than $250,000 for various local and international causes related to education, healthcare, poverty alleviation, entrepreneurship, and COVID-19 relief efforts. For his active work in the Canadian Tamil community and broader civil society in the Greater Toronto Area such as the Institute for Canadian Citizenship, Kumaran was named a 2018 DiverseCity Fellow by the CivicAction Leadership Foundation.

The sparks that started comdu.it

comdu.it was not conceived overnight but rather over many years and was fundamentally shaped by two experiences in 2003 that made a lasting impression on Kumaran.

The first was when he, along with Tamil student leaders at several Ontario universities, independently co-founded The Student Volunteer Program (TSVP) during the Norway-mediated ceasefire agreement in Sri Lanka to place university students as volunteers in the North and East of that country and for the very first time ever in the Vanni region. Through this program, Kumaran himself returned to the North since first leaving it as a five-year-old to spend the summer of 2003 in Kilinochchi where he did everything from teaching English-as-a-Second Language and computer skills, shipping refurbished computers to high schools in the Jaffna Peninsula, helping collect and donate tens of thousands of books to the University of Jaffna, and building websites for local community-based organizations to co-writing a report on people with disabilities caused by the war. Most importantly, he was privileged to learn from those living with the everyday reality of war. When he returned home to Canada, his interest in Sri Lanka, Tamil, and diaspora issues further deepened when he earned the rare opportunity to serve as research assistant to leading social anthropologist Stanley J. Tambiah who was undertaking critical early research into transnational political mobilization of Tamil Canadians. These two experiences firmly planted in him a sense of responsibility to always stay connected to the people and land of his birth.

Life went on, and the seed for comdu.it laid dormant in Kumaran’s mind until almost a decade later, when he was reminiscing about TSVP with some friends. Around the same time, he decided to leave Canada to preserve his mental health following a difficult period in his life. From Lebanon to Rwanada and Cambodia to China, Kumaran emptied out his savings backpacking his way through more than 20 countries throughout 2014. During his travels, he gained a broader understanding of the world and a deeper questioning of the legacy that he wanted to create for himself. His introspection helped him launch comdu.it and start up Konnect Communications while on the road.

Since formally incorporating as a non-profit in 2016, comdu.it has sent nearly 25 diaspora professionals from Canada, Germany, Switzerland, Norway, and Australia to volunteer with local partners primarily based in the Northern and Eastern Provinces serving vulnerable populations. comdu.it also launched its first international chapter in Germany in 2018 with plans currently underway to expand to more countries. comdu.it’s work, which has touched nearly 70% of the districts in Sri Lanka and especially the traditional Tamil homelands in the North and East, has been recognized by the Canadian, German, Switzerland, and United States foreign missions to Sri Lanka and has also been featured in several Canadian and diaspora media.

“At its core, comdu.it is about building a resilient and impactful bridge into the future between the next generation of the homeland and the diaspora. This is an incredibly important responsibility, which we don’t take lightly.”

Kumaran didn’t dream of being a public servant growing up. It was, in many ways, a series of coincidences that gave him the proverbial foot in the door. What started out as a summer job offer at the Ministry of the Attorney General of Ontario to pay off his student debt has turned out to be a decade-long fulfilling career in public service.

Although the public sector may not be on the shortlist for many young professionals, Kumaran strongly believes it’s a valuable experience to add to your resume. When you work in government, you learn how the internal machinery of a large organization operates. You learn how government decisions are made, how those decisions get implemented, and how and where taxpayer money is spent. It also teaches you how to manage teams in a unionized environment, lead without title, and create and leverage soft power. It’s an essential lens to add to your toolkit, and Kumaran recommends that every professional consider spending at least a couple of years working in government or the broader public sector and truly understand and appreciate the critical role that the civil service plays even though elected office may seem more enticing.

“Public service is about more than just holding public office.”

From Jaffna to Chennai, Muscat to Melbourne and in Toronto, Kumaran had to adapt to a variety of different settings and cultures. When he moved to Scarborough at the age of 15, he found it difficult to fit in with the high school crowd because of his lack of cultural context. He still vividly remembers being laughed at by his entire class when, on the first day of high school at Woburn C.I., he stood up when the teacher walked into class just because it was ingrained in him from his schooling in Oman. The white kids picked on him because he had a strange accent, and the Tamil kids picked on him because he spoke proper English. Like the stories of so many Tamils, there were also the struggles of a new immigrant family settling into Canada; his mother couldn’t find a job related to her profession as a lawyer, and his father went back to Oman to continue working as an accountant. Growing up in Tuxedo Court with a mostly physically absent father figure only served to strengthen Kumaran’s resilience and motivation to work hard and further his education. He readily acknowledges that even though not everyone in our community has pulled themselves out of precarious circumstances, it is still inspiring to see just how much the Canadian Tamil community has managed to achieve in a single generation despite the pain and trauma of what brought us here.

“Being Tamil is a political existence.”

Despite the barriers he faced, Kumaran has managed to overcome many of them and continues to create a life that stays true to his values. His proudest moment was the birth of his daughter, two years ago. It’s a cliche, for sure, but every cliche has a grain of truth in it. When Kumaran first held his daughter in his arms, he felt not only a sense of wonder stemming from this miracle of life but also renewed purpose in many other parts of his life. It took a lot of personal struggle for Kumaran to reach the place of fatherhood – he had to deal with the passing of his beloved mother during the same week he was to tell her she was going to be a grandmother. Nevertheless, as his daughter grows, he sees more and more of his mother’s irreverent personality in her.

In the future, Kumaran sees himself accelerating value creation for visionary leaders in and around his network doing important work, whether in business, non-profit, or government. He also sees comdu.it scaling greater heights as it becomes the premier instrument of development impact back home for the next generation of the global diaspora. He seems himself continuing to be a cheerleader for “Tamil excellence” as we build forward together.

Where the Canadian Tamil community is headed

In the past 30 years, the Canadian Tamil diaspora has achieved so much, despite being driven out of their traditional homelands. They came here with almost nothing, worked hard, and built a thriving community upon which we stand to reach greater heights. In Kumaran’s view, we need to keep supporting each other and building upon what our predecessors have made in order to continue moving forward in a constructive manner.

One of the issues that keeps Kumaran up at night is how the Tamil community can band together to advocate for their interests here in Canada and abroad. While our competitive streak has helped us establish ourselves in several verticals, it has also set us back sometimes by pitting us against each other. Instead of gatekeeping what it means to be a Tamil, Kumaran believes that the Tamil community should work from a core unified sense of identity and purpose and use that as the baseline for what overarching community projects come next. On this, Kumaran is optimistic. He sees the work that younger advocacy groups have been doing, how they have been inclusive, trying to understand where everyone is coming from, and empathetic to each other’s struggles. He is confident that the future of the Tamil community is sound, with Canadian Tamils coming together to build forward and to build better.

Please join us in congratulating Kumaran on his Toast to Success Established Professional award!