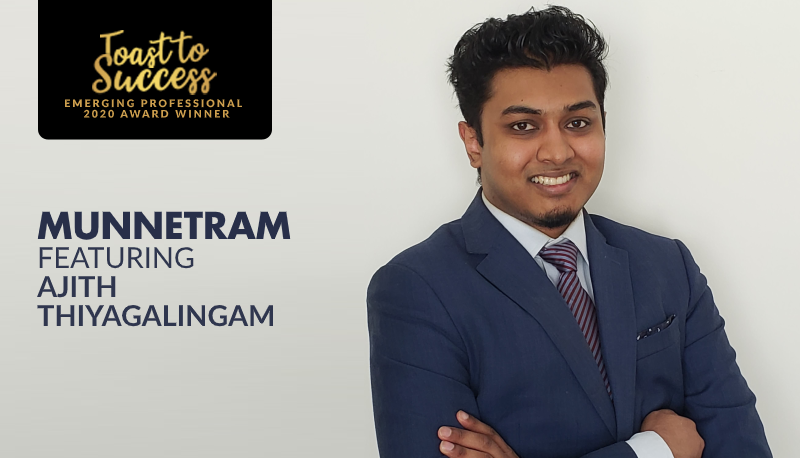 Our annual Toast to Success Awards of Professional Excellence, celebrates leaders who have demonstrated professional growth and strong commitment to enriching the Tamil community. The 2020 recipient of CTPA’s “Emerging Professional” award is Ajith Thiyagalingam.

Ajith has championed the rights of the Tamil community through his legal and policy work, and various initiatives. Ajith is Legal Counsel at the Immigration and Refugee Board of Canada (IRB). At the IRB, he assists refugee judges with their decision-making and lends a voice to legal and policy issues that are of national interest and international significance. He is directly involved in creating immigration policies and frameworks. Ajith brings the lived experience of the entire Tamil community, who came as refugees through this immigration process, to his profession. Ajith also sits on the Board of Directors of JusticeNet — a national not-for-profit organization seeking to make justice more accessible and equitable.

Coming from a low-income, refugee background, Ajith was the first person in his family to attend university. Witnessing first-hand the intolerance, struggles, and injustice that his parents and community faced in a new land, he developed a passion for social justice, human rights, and advocacy in his youth. This passion led him to attend Osgoode Hall Law School, where he obtained his Juris Doctor. He completed his Bachelor of Arts, summa cum laude, from York University. Ajith’s pursuit towards understanding economic disparities and alleviating poverty led him to complete the Fintech Programme at University of Oxford’s Saïd Business School, and an Executive Programme in Business Strategy and Finance from INSEAD Business School. As an advocate for STEM education, he is currently completing the Computer Science for Lawyers Executive Program at Harvard Law School to empower others in his community.

A childhood with barriers

Growing up in a family with five children, it was difficult to make ends meet with Ajith’s mother being a homemaker and his father working factory and cleaning jobs. Culturally, being the eldest child to refugee parents, Ajith had to navigate Canadian society on his own. With parents who had difficulties of their own assimilating into a new country where they faced barriers in language, employment and culture, it was difficult to communicate his needs and wants when there was no shared experience.

Raised in both Toronto and Barrie, Ajith had to deal with issues of inclusion, sometimes feeling alienated by peers who had the support, structure, and resources that he did not have. At moments, he even experienced open prejudice, bullying, and racism.

Ajith’s decision to pursue law was driven by his desire to be in a position of power where his voice, choices, and actions mattered; where he could have a real impact on people, communities, and society. Law was an avenue to secure a financial future for himself and his family, while also developing the skills and tools to give back to the community and society.

In his current role, Ajith leads and trains teams of decision-makers at the IRB in the Refugee Protection Division and the Refugee Appeal Division. As one of the first Tamil people in this type of position, he makes a great effort to bring the minority voice and perspective to the legal system as a champion of diversity. He has been taking a leadership stance in helping break down systemic biases against migrants, in addition to addressing the unique challenges faced in cases involving women escaping violence.

Some of Ajith’s proudest moments were when he graduated top of his class in university, got early admissions into multiple Canadian law schools, graduated from law school, and then was officially called to the bar as a lawyer.

“My journey to become a lawyer culminated from years of hard work and sacrifice. And I was able to share that moment with my family.”

Tamil is part of Ajith’s core identity. His mother was the catalyst that got him engaged in his Tamil roots from a very young age. He grew up participating in Tamil cultural competitions (பேச்சு போட்டி), pursuing Tamil studies, volunteering at Ayyappan and other Hindu temples, engaging with his family and community, watching Tamil cinema, and more. He would wake up at 5 a.m. some days, where his mother would teach Thirukkural, prayers, and scriptures. At the time, he wondered why he would need to learn all of this and how it would be useful in the future, but he now realizes that these experiences have shaped who he is.

“As I began to attain personal and professional achievement, I knew it would not be right for me to leave my Tamil identity behind for the sake of fitting into the status quo. A lot of people inspired me on this path, and it was my time to give back.”

Ajith is very actively involved in the Tamil community now, educating Tamil youth at the Hindu temples where he has taught Tamil linguistics and cultural and religious studies. He has helped create programs to get more Tamil youth in school. He is currently working on securing funding for a community-based project that would get more Tamil people off the streets and into community housing, and give them the right mental health support systems.

Gender inequality is very important to Ajith, and through his work at JusticeNet and legal clinics, he has worked with Tamil and racialized women who have faced gender-based violence. He has also actively worked with mental health programs that affect the Tamil community.

Growing up with three younger sisters and his mom, Ajith was especially sensitized to the great deal of gender inequality, domestic violence, and toxic masculinity in society. He also noticed a lack of acceptance towards the LGBTQI+ community and people suffering from mental illness.

“With my legal training, I actively engage in programs now to combat these issues, listen to the stories of survivors, and do what I can to help make people’s lives a little better.”

The boards, which Ajith is a part of, receive a lot of refugee claimants who are fleeing abuse, especially from countries where women and LGBTQI+ members don’t have the same rights as others. The boards want to make sure that these people are taken care of in Canada and that their voices are heard.

What the future holds

In 10 years, Ajith sees himself in a mid-level to senior position in his career, whether it’s in law, business or politics. He’s not closing any doors to possibilities for the future. Ajith is also committed to staying an active member of the community, continuing to engage in mentorship and paying it forward. He hopes to be living a happy life with his family.

It is important for Ajith to remember where he came from, what he’s done and what it took to get there. As he continues to rise in his career and life, he doesn’t want to forget his roots. He would like other professionals to look up to him as a path that they could follow.

The Tamil community is continuing to rise and achieve great things in Canadian society. In 20 years, Ajith believes we will see more Tamil people in mid-level to senior positions in various industries, and not just in white collar professions. He believes skilled trades and college programs would really benefit a lot of people. He wants to see more Tamil people embracing education in all forms.

He hopes we will also see more Tamil women breaking barriers and rising to high positions, and that the community, and their families, will offer them the right support and guidance.

“I hope there continues to be an interest in Tamil culture and the arts, so that we can share it with the next generation, and our Tamil identity is not washed away with time, assimilation, and neglect.”

Please join us in congratulating Ajith on his Toast to Success Emerging Professional award!