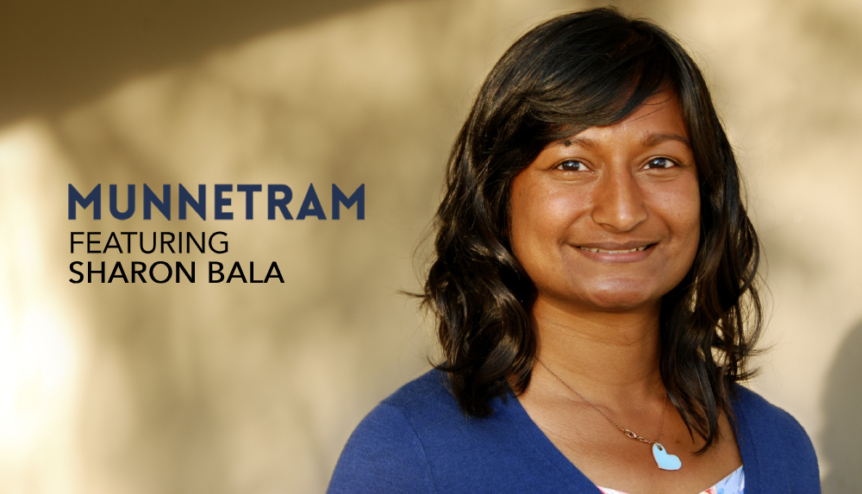 Sharon Bala is a writer, best known for her novel The Boat People, and has also published a number of short stories in a variety of magazines. In today’s Munnetram feature, we spoke to Sharon Bala about her journey as a writer, and how she crafts compelling, character-focused stories.

Although Sharon has been writing since she was a kid, she didn’t take the “standard route” to become a writer. By that, she means earning a Masters in Fine Arts, writing several books, going on to become a professor, and then publishing those books. Instead, she went to university to get “a real job.” After graduating, she worked for several years in public relations, while continuing to write on the side. Due to a change in geography, moving from Toronto to Newfoundland, she ended up writing as a second job, as she went from contract to freelance work. The free time allowed her to take classes, exercise her writing muscle, and work on some short stories. These short stories grew and multiplied, and eventually Sharon had the courage to send them out to publishers. Rejections kept coming, again and again, yet Sharon had the perseverance to keep writing and sending her work. They say success comes all at once, and in 2015, she was able to publish a number of short stories.

Around the same time, Sharon was working on her novel, which would become The Boat People. Her inspiration came from the MV Ocean Lady docking in Vancouver in 2009, and a few months later, the MV Sun Sea in 2010. Both ships carried a total of 568 refugees, all from Sri Lanka. Although she was on the east coast at the time, she followed the events with curiosity, but also sadness. As she notes, many of our parents and relatives arrived in Canada as refugees in the ‘80s, and they were welcomed with open arms. However, the refugees who arrived in 2009 and 2010 were detained, interrogated and questioned on the veracity of their claims. She thought about their experiences, and started working on the novel in 2013, in conjunction with her short stories. The workable draft of her novel was finished in 2015, after which Sharon pitched her novel to the big publishers. In 2016, her draft was sold to a publishing house, and that’s when Sharon decided to pursue writing as her full-time job.

How to write a great story

Most writers think of their plot first, and then make characters to suit the plot, but Sharon thinks of it differently. She writes out her characters, fleshes them out and gives them their history, and from there the plot of her story emerges. These characters have a family, a childhood, hopes and dreams that change over their lifetime. The environment that the characters were raised in, their formative experiences, and how it affects their psyche all work to make the character believable and real. When writing her stories, Sharon also discovers new aspects of her characters that she didn’t realize were there before. Usually, these discoveries come from the actions a character takes in a story, which causes Sharon to ponder “Why is that character doing what they’re doing?” This leads to the discovery of a new aspect of that character, and ultimately the character grows and develops throughout the novel. This was the case for the main character Mahindan, in The Boat People.

Mahindan changes from a hopeful person at the beginning of the novel, to a man sapped of hope at the end. He transforms from a follower to a leader, having to take care of his child when his wife passes away. The character has changed, but not in a fundamental way, and this forms the basis of the novel’s narrative arc. For Sharon, if you fit your characters to the plot, that’s when your plot “jumps the shark” (that is, when the plot reaches its peak and then goes downhill). Instead, put your characters in impossible situations where they are deeply uncomfortable. You’ll find that their reactions and growth will push the narrative forward, and make for a great novel.

What does it take to become a writer?

If you want to become a writer, academic programs are not the only way for you to develop your creative muscle. In fact, these programs are often not useful for Black, Indigenous and People of Color (BIPOC), because the instructors don’t look like us and don’t share our lived experiences. There are so many excellent free literary resources available on the internet for budding writers, that they can DIY their education without the need for academia. Sharon recommends that you attend literary festivals, to learn from a breadth of writers and expose yourself to new styles. The more experiences you have of the world, outside of academia, the more you can bring back to your work and enrich it. Another way to improve your writing is by working on short stories. These stories are to novels like sprints are to a marathon: you need to start somewhere, and start small before you work your way up. Each short story can focus on a different theme, form, characters, and allow you to explore different topics in small bites. This was how Sharon refined her writing, and she found that the themes she explored in these short stories made their way into her novel.

For Sharon, there is no typical work day. Her days depend on what stage of a book she’s in, and whether she’s meeting a deadline of her own or a deadline imposed by someone else. Some days she could be writing endlessly, other days she could be traveling to promote her work. While she tries to keep a 9-5 schedule, there are days where her schedule just flies everywhere. Since COVID-19 has put a stop to most travel, this has helped her juggle her freelance work with new projects, and allows her more time to create a reading list for these projects. The readings are not only just research, but also nourishment for the soul.

Her sources of support come from her writing group and from her husband. Both sources read over her work, and offer critique and suggestions on how to improve. Her husband especially has read over many early drafts of her novel. In addition to local support, Sharon is also supported by the writing community in Newfoundland, and the community of writers throughout the world. She’s been grateful to meet writers in Canada, and globally, who are generous with their advice. The advice is not just about writing, but also about the more mundane job aspects of a writer, like how to negotiate contracts and how to promote your novel effectively. While Sharon does talk about the writing process with other writers, at the end of the day, they’re more than happy to share book recommendations and give moral support.

For Sharon, the best part of being a writer is the writing, and she feels it’s made her a happier person overall. Many people see writers travel the world to promote their books, and may feel jealous. Indeed, Sharon had spent two years travelling and promoting her novel The Boat People. But all that traveling took time away from writing, and it wasn’t until COVID forced her home that she was able to get back to pen and paper. For a writer, the real joy is in the time spent creating new worlds and characters of their own, simply by putting a pen to paper.