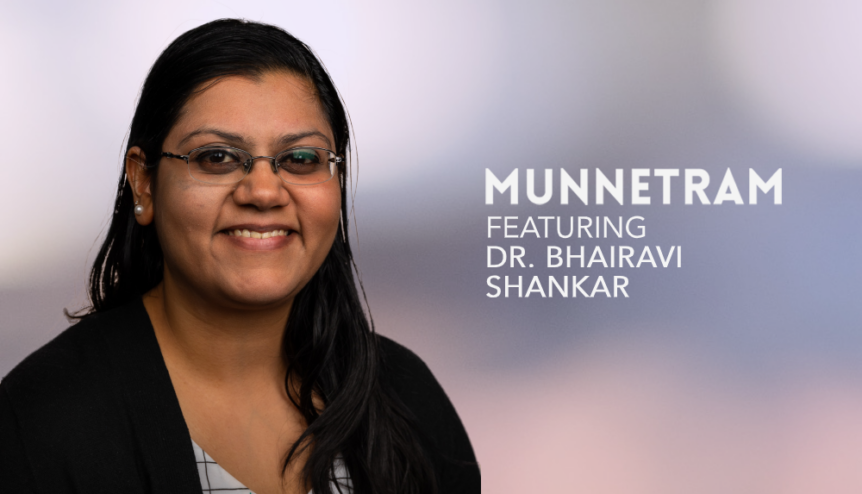 Dr. Shankar is a scientist who specializes in planetary science, a field that combines astronomy, geology, and geography. Her research focused on studying the surfaces of planets like Venus, Earth, as well as planetary bodies like the Moon, in order to determine their history. She uses Geographic Information System (GIS) mapping, in combination with various sets of data, to study the surface and make her analyses. She is also a flourishing entrepreneur and founder of a startup called Indus Space, which aims to bring space science to the classroom.

Her fascination for the sky started in her childhood, when she would look up at the night sky and gaze upon the stars. As a teenager, she viewed the comet Hale-Bopp in 1997, which only deepened her interest in outer space. After moving to Canada in her teen years, she had to complete a specific number of hours of volunteer work for high school. That led her to join an astronomy outreach organization, the Royal Astronomical Society of Canada (Toronto Centre), where she volunteered by conducting public outreach sessions on space science. Through the organization, she met people in the astronomy field, saw her very first lunar eclipse, and was motivated to study astronomy in her undergrad.

It turns out, while she was super interested in astronomy, when it came time to actually study it, it just didn’t click. From there, she found that UofT had a planetary science program, which combined astronomy with geology and geography. After taking a few geology courses as part of this new program, she found that she really enjoyed the unusual combination of astronomy and geology. These are fields that people think are polar opposites, and yet here was a program that combined the two into a new field of study.

After her undergrad, she went into her masters, thinking that after two years, that would be the end of it. However, as we can tell from her name, Dr. Shankar continued her research and obtained a PhD from Western University in Geological Sciences (Planetary Science).

At first glance, the connection between geology and astronomy is not readily apparent. How can we feasibly study the surface of a planet when we are lightminutes away? We know we can study the surface of the Earth because we are right here, on it. GIS allows you to use different sets of data in combination with their spatial location, to gain information and solve problems.

For example, let’s say you want to find out what neighbourhood features result in the highest home values. You would take a map of Toronto, along with two data sets: one set contains the locations of different features (library, community centre, mall, access to parks), and the other contains 2020 house sale prices. You overlay both sets of data on the map, and you find that houses which are closer to libraries have a higher sale price, while houses that are next to malls have a lower sale price (as an example). This is one of the many ways that GIS has enabled researchers and companies to identify problems, create forecasts, and visualize trends.

“By overlaying various types of data on a map, you are able to solve problems and see trends in the data.”

By combining spatial and spectral (light) data from satellites, with a map of the planetary surface, Dr. Shankar researched the geographical features of various planetary bodies, as well as construct elevation maps of the surfaces she investigated. This is especially important because it allows engineers and scientists to determine where to land their rover. Like the Earth, the surface of many other plants is not smooth, but has a variety of valleys and mountains, which makes landing a rover very difficult if you don’t know what the landing area surface looks like, or how rough and bumpy it could be.

While elevation data is helpful, it can’t tell the whole story, which is why Dr. Shankar combines elevation data with photo and radar data, as well as information gathered from previous explorations. All this data, in conjunction with a map, allows Dr. Shankar to create a detailed landscape that allows scientists to determine the best and safest landing site for their rover.

Academia isn’t Dr. Shankar ‘s only forte, as she is currently running her startup, Indus Space. The idea for this startup came from her experience in high school, where she found that there weren’t many opportunities for students to learn about space and planetary science, in comparison to other STEM fields. The lack of opportunities for space science outreach ties into the broader issues of lack of STEM outreach, and lack of women in STEM. She wanted to bring more space science and GIS outreach to the schools, and that’s how Indus Space was born. While it’s not necessarily difficult to conduct this outreach, the challenge lies in finding out where the gap in knowledge still exists.

For example, everyone will know what Google Maps is, and how to get directions to where they want to go, but they usually don’t think beyond that surface. Dr. Shankar tries to change that by questioning her audience, “How would you find your location if you didn’t have GPS?” and from there, she slowly introduces the concept of GIS and what it can be used for. She finds that the more you bring up examples of how GIS is used in everyday life, the more her audience understands it. She also uses real world examples in her outreach, like pointing out Canada’s many contributions to the space science sector, or how GIS can help figure out an escape route if there was ever an emergency or natural disaster.

“Everyone knows what Google Maps is, but they don’t usually think beyond that. I use it as a starting point to introduce my audience to GIS.”

The transition from academia to entrepreneurship was not without hurdles. Academia tends to focus heavily on the technical aspects of a field, and doesn’t introduce enough business acumen to its students. Dr. Shankar found she had to learn everything from the ground up, from setting up a business, to running the business and identifying the target market. However, the transition allowed her to expand her network and meet people from all areas of work, not just academic or entrepreneurial work. By expanding her network, she was able to learn from her connections and gain a community of people who wanted to help out.

While in academia and in entrepreneurship, you go through the high points and lows points of your project, at the end of the day, being an entrepreneur means you are working on your own idea and your own project, while in academia you are often working on the passions of someone else. That ownership is what makes entrepreneurship fulfilling, and universities need to incorporate more business and entrepreneurship training to their masters and doctoral students, so that they can test out their ideas during their studies, and not wait until the very end to find out that there are not very many jobs for them in academia.

For Dr. Shankar, a day in her work life is always changing. As the founder of her company, she juggles multiple hats as she works to expand her team, apply for grants, as well as manage her employees’ work. There are weekly meetings to check in on the team, see how everyone is doing, and then proceed to solving problems and brainstorming ways to facilitate programming. Due to COVID-19, her outreach activities have gone virtual, but they are still as busy as ever. She also is always continually learning how to run a business, through webinars and workshops, as well as presenting her research at conferences. All in all, no day is quite the same!

Finally, a shout out to Lotus STEMM, a networking and leadership platform for South Asian women in Science, Technology, Engineering, Math, and Medicine (STEMM). Dr. Shankar is on the board of directors, and she encourages all South Asian women who are in STEMM to join and benefit from mentorship.